Let us not forget the Occupation and the Watcher 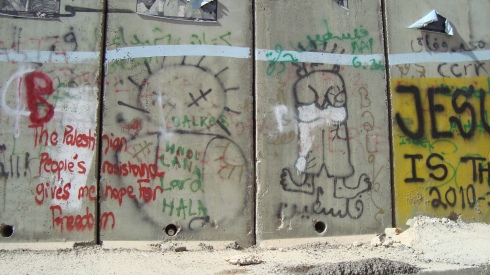 Who is drawing this cartoon on the Separation Wall and elsewhere in East Jerusalem and the West Bank? This image of a 10-year old, refugee child named Hanthala (or Handala)? This creation by Naji al-Ali who died in 1987…

Any suggestions? The cartoon has caught hold of many imaginations…

I have been waiting until the right moment to introduce you to Handala, also written as Hanthala [see this book review]. He caught my eye in the first week or so of my time here. Other Ecumenical Accompaniers, who had met him previously, told me two things about Hanthala: (i) he will only grow up after the Occupation ends; and (ii) we will only see his face once the Occupation ends.

Who is Hanthala? He is the cartoon creation of Naji al-Ali, a man who was born in Palestine and who became a refugee in 1948. At that time, he was 10 years old. He grew up in a Palestinian refugee camp in Lebanon and spent much of his adult life in Kuwait as well as Lebanon. He was assassinated in London in 1987, just a few months before the First Intifada began.

Naji al-Ali described Hanthala as his signature in his political cartoons. Hanthala is a 10-year old and a critical watcher not only of the Israeli State but also of the wealthy Arab elite across the Middle East.

Even though al-Ali died almost 24 years ago, Hanthala continues to watch. I have seen him watching from many walls in East Jerusalem and the West Bank. As we all watch the Middle East, particularly how the events in Tunisia, Egypt, Jordan, and Lebanon may impact Palestine and Israel, I will continue to post images of Hanthala…watching.

Love – No Fear – Peace in Israel-Palestine

When I visited Tel Aviv in late December, I looked for wall art in the neighbourhood between my hotel and the sea. I saw this piece:

I also saw this piece: 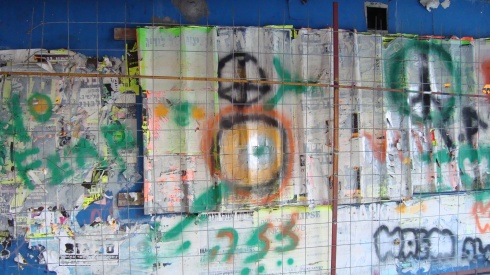 And, I saw this piece: 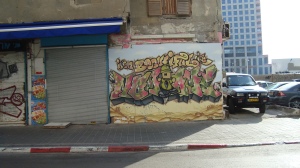 What does it all mean in the larger context of Israel-Palestine?

This wall art appears in one of the empty homes in the Palestinian village of Lifta in West Jerusalem; the Hebrew place name is En Neftoah. In late 1947 into early 1948 as Israeli troops took control of Jerusalem, the Stern Gang killed members of Lifta. The remaining Lifta community fled. As a result, the village has come to be described as “abandoned” and “deserted”. However, some of these Nakba refugees still live along with their descendants in East Jerusalem, Ramallah, and Amman, Jordan. While calls have been made that the village, set within a lush wadi (valley) with a natural spring, be identified as a World Heritage Site, the Israeli government has granted permission for the area to be re-developed. See this recent article from 21 Jan. 2011 in Haaretz.

“Their love is stronger than this wall.” 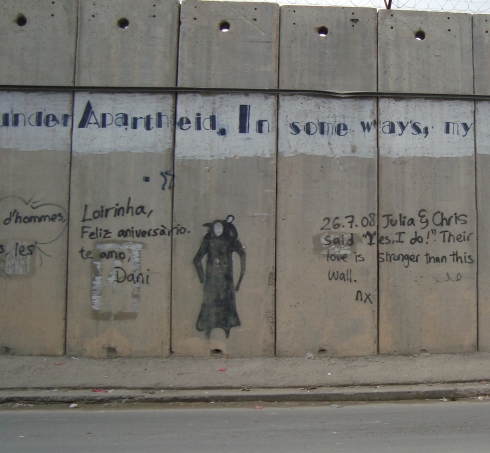